You are a zombie. You are looking for a good killer time. What else is there to do but tear your head off and see how high and for how long you can keep it soaring through the sky? This is A Killer Time; a lifelong dream realized as a simple, challenging, and fun mobile game.

A Killer Time started off as a fun animation I was working on in the weeks leading up to Halloween. I love pixel art and I wanted to create a short animation for the holiday. At the same time, I was playing Super Ball Juggling (the lesser known but still great work of Flappy Bird developer .GEARS) and got inspired to try and take the art I had made to make a game in the same style; one simple mechanic that is fun to play but difficult to master. I was just starting out with GameMaker Studio and thought it would be a natural fit to bring my zombie to life.

In A Killer Time, you tap and hold to charge your swing and then, at just the right time, let go to send your decapitated zombie head soaring, majestically, into the moonlit sky. If you fail to make contact, your head smashes like a past-due pumpkin on the pavement and your body falls lifelessly to the ground. The higher you can hit your brainpan, the higher the multiplier, rewarding you with even more points with each successive hit. 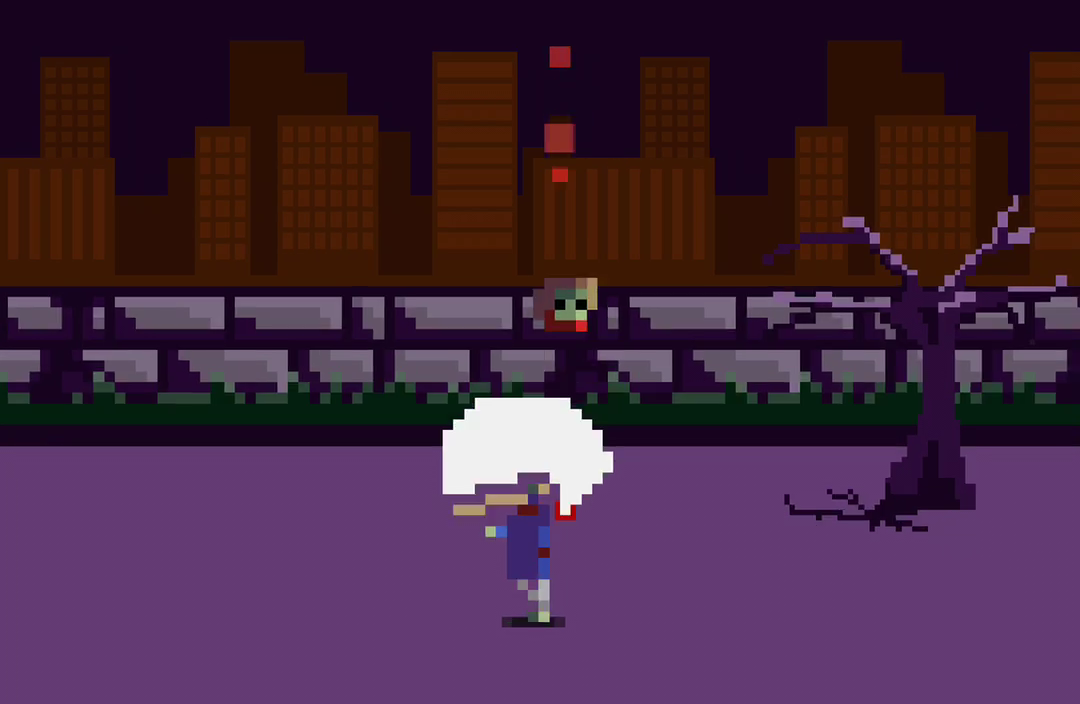 From the very beginning, I envisioned A Killer Time as a mobile game. It had been a goal of mine to put an app up on the App Store since it’s launch in 2008, but for one reason or another my attempts had always failed. Once the initial game was built, I decided to see what it would take to publish the game not only on the Apple App Store but the Google Play Store as well. I had published internal apps to the App Store so I was familiar with the process, but the Google Play Store was a complete unknown for me.

It wasn’t the stores that ended up giving me the most trouble, but trying to take into account all of the different devices the game could be played on. I probably spent a week on scaling the UI alone. This problem was exacerbated by each vendor reporting resolutions and pixel depth in different ways.

The final week of working on all the little finishes, trying to fix scaling bugs, and getting marketing materials together for the stores was easily the most difficult part. In the early weeks of development, I was receiving constant, substantial, rewards like seeing the skull fly into the sky for the first time. The final weeks I spent trying to get the end product to match what I thought was already true. The desire to have the finished product in people’s hands was the only thing getting me through the slog.

I was able to learn what it takes to get a simple game onto the various stores, what it takes to get a game to work across multiple platforms and devices, and what hurdles you can expect to run into navigating the whole process. As more and more companies are looking to explore using video games as a way to drive engagement, being able to speak with some authority on what the process will look like is imperative.

Being creative and getting to see people enjoy something I made is ultimately why I built A Killer Time. I couldn’t have made this game without the support of colleagues, friends, and family testing out betas and providing encouragement along the way. Getting messages from people having fun with the game and brimming with pride at the high score they were able to get brought so much joy, inspiring me to start thinking of what the next game could be.

Recently we asked the collective, what is the coolest thing you've worked with lately, or want to work with next? Here are the answers! Ryan Grab a Sparkfun Pan/Tilt Bracket, Joystick shield,